Have you ever wondered what happens to things when they “vanish?” In all those movies and TV show that feature magic there is usually a moment when someone makes something vanish. Does it just disappear into molecules or does it get “beamed” to a planet where everything else that vanishes goes? It would be nice if you could use some of that magic to make all the scary junk in your home vanish. But until you learn how to cast spells, you’ll just have to count on Junk King Chicago to take care of that scary junk. 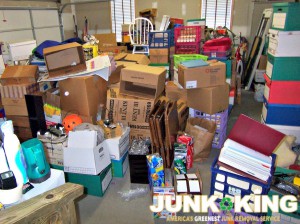 What makes a piece of junk scary? The first consideration would be anything that might be deemed a hazard. If a kid can crawl into a fridge, washer or dryer, then they probably will. That is what keeping those kinds of broken appliances on your property could become a hazard and very scary. They’re easily removed by Junk King’s two-man moving crew. This is the team what comes standard with every junk removal session.

The scary junk could be all those things casting shadows down in the basement or out in the garage. Have you ever been forced to poke around in those spots when the power is out? It’s not fun! How much of that stuff can you turn over to Junk King? Remember, they’ve got the lifting power and the truck space to get rid of anything you want to toss out. Put them to the test.

As for the “vanishing” part, Junk King isn’t just going to dump what they collect into a landfill. Instead, they’re going to take the time to sort through all the things they’ve gathered up and to determine if they can find a better spot for it at a charity or recycling center. It might mean making a few extra drop offs but that is work that Junk King is happy to do. They’ve been dedicated to this kind of disposal every since they began collecting junk back in 2005.

Is it time to clear your home of all the scary junk that is pilling up? Then it is time to call in the pros from Junk King Chicago. Make it happen today!

Fans of horror films know that once the sun sets, you don’t go down into the basement. Of course, folks in those films always do down in the basement and that’s when the trouble starts. Could your basement be the set of a horror film? It might be if it is filled with all kinds of rubbish. Even a finished basement that is in constant use as the family room can still have its fair share of clutter that needs to be removed. Before the holidays kick into high gear, schedule a session with Junk King Chicago to make all that basement rubbish disappear. 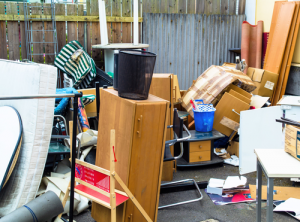 In many homes, once something “lands” in the basement it stays there. Maybe it was brought down by the original movers. Maybe it was something that was assembled down there. Whatever way that item got there, it will take at least two movers to bring it up again and that is exactly what Junk King can provide. The Junk King crews have a lot of experience maneuvering heavy objects up and down stairs. And it’s not just basement stairs but stairs leading up to a second floor and apartment walk-ups. The crews will know from looking over the piece whether it can make it up the stairs without damaging the walls. If there is a risk, then they’ll take the thing apart first. Junk King is all about problem solving when it comes to rubbish removal!

Making rubbish removal from your basement a priority doesn’t mean you have to stop there. The Junk King teams can carry out anything from any room in the house. They can also help clear out the garage and yards. There is going to be a lot of open space left behind when Junk King is finished at your home. That’s a good thing!

When the Junk King truck is loaded and you’re satisfied, the job on your end is complete but the crews have a bit more work ahead of them. They’re going to be sorting through all the stuff you want to get rid of to see what can be recycled and what can be donated. Junk King likes to keep it green.