As your kids are growing up, they’ll be working through bikes as much as they work through shoes. First, comes the tricycle which carries them through the toddler years. Next is the small bike with training wheels. Once those training wheels come up, the kid graduates to a slightly larger bike. That can carry them to around age 11 but in the preteen and teen years, there will need to be another bike all together. Once all that bike riding is done, they’re off to college and you’re left with all those old bikes! Not any more. One call to Junk King Dallas Mid Cities can handle your old bike disposal along with clearing away the rest of your unwanted rubbish today. Those old bikes are probably piled up in the garage. Think about how much room you could take back if you got rid of them. What else can you have Junk King remove from the garage? Are there tools, car parts, spare tires, sporting equipment and electronics crammed on shelves? If you’re never going to use those things again, then why hold onto them? It can all be given to Junk King.

The Junk King crew who is going to be doing the removal won’t have any issues with objects that are especially large or heavy. They also won’t have an issue with taking something apart. You could have Junk King take everything off a set of shelves and then take down the shelves, too!

Everything will be packed tightly onto the Junk King truck. That matters because the less space your stuff fills up, the less you’ll be paying. You’ll know what that fee is before the loading begins. The crews have a lot of experience with packing so they’ll know exactly how much space your stuff will take up. This is a much fairer approach than charging by the pound.

Along with clearing out all the stuff from your garage, the Junk King crew can also make the rounds around your yard to pick up any debris out there. One session with Junk King Dallas Mid Cities is all it will take to get rid of your old bike and the rest of the rubbish. Make it happen today.

Whenever you buy a home, you see it in the best possible light, literally and figuratively. Rarely does any one go home shopping at night or during a storm. Yet, that is really what you should do to consider all the potential “pitfalls” of that property. That is what one Cedar Hill homeowner is probably thinking after discovering that a drainage ditch that runs through his property backs up in heavy rain and spills garbage into his yard. 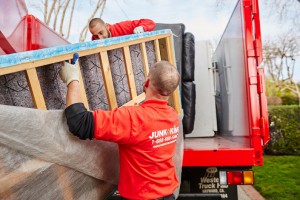 “I have a two-year-old son that I can’t allow in our backyard because this all comes right in my yard,” said homeowner Jacob Hunter to a local newspaper. “Styrofoam, plastic, and aluminum cans. And that’s just some of it. “It’s everything from razor blades to hypodermic needles,” he said “Six-inch pieces of wood with rusty nails in it.”

According to the city, it is his responsibly to maintain the lawn around the ditch but it is hard to mow grass with trash in it. Apparently, the city is moving forward to replace the above ground ditch with an underground one. However, no one is tackling the problem of the trash. Won’t it flow underground and get clogged there?

Have you ever had to deal with debris being dumped into your yard after a rain storm? If that were to happen, then you wouldn’t have to wait for the city to help with the cleanup. Instead, you can hire Junk King Dallas Mid Cities for a fast rubbish removal.

The crews working for Junk King have seen all kinds of trash and rubbish piles. They’ve cleared their fair share of foreclosed homes and vacant lots. That means whatever kind of rubbish you want them to remove from your property won’t surprise them. It also won’t matter if the object is rusty, grimy or just plain heavy. Junk King crews have hauled away fencing, fallen tree limbs, above ground pools and hot tubs.

Most of Junk King’s removal sessions are completed within 24 hours. That call you make today can translate into your rubbish being removed by lunch time tomorrow. It is just that simple. When you want rubbish removed from your Cedar Hill home, you can always count on Junk King Dallas Mid Cities to do the job fast.