How good are you at asking for help? Some people like to do things on their own because they feel that is the only way to get it done the right way. There is certainly a lot of support for that way of thinking. However, when you try to take on too much then you get overwhelmed and whatever project you’re working on suffers. You probably ask for more help around the house then you do at work. But there is no guarantee that your family members are going to do what you ask in a timely manner. Yes, everyone is guilty of procrastinating when it comes to household chores. This is where the issue of asking for help comes back into play. When you need to get big items hauled from your house, then the best people to ask would be Junk King Miami. Junk King is a professional junk hauling service that is standing by to lend a hand with all types of junk removal. Contractors will often call on Junk King to help with construction waste cleanup. Apartment managers know that they can get a unit cleared out by the junk King crew very quickly. Real estate agents put Junk King to work at foreclosed properties to help get it ready for market. What would you like hauled away from your house?

The typical home junk hauling session set up by Junk King usually involves a few pieces of furniture, some electronic gear and other random household items. All of these things will be packed tightly onto the Junk King truck. The less room your stuff takes up on the truck, the less you’ll be paying. Junk King’s pricing policy is always based on by am not weight.

Because you have a crew at your disposal for this task there is no limit to what you can get hauled away from your home and that includes stuff from the front or backyard. One junk hauling session with Junk King Miami is always going to take to transform your home. Ask for that help today.

How often do you go up in your attic? Unless the attic is an actual used room in your home, most folks only make the trip when it is time to decorate for a holiday. Right now, the Halloween decorations are out but they’ll soon be swapped out for the Christmas decorations. In between, you might have put some stuff you’re not using up in the attic just to “get it out of the way.” Is that space becoming overcrowded? When that happens, it is time to get rid of that unwanted rubbish by turning it over to Junk King Miami. 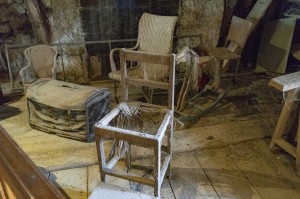 While it might be true that everything up in your attic was carried up there by you, that doesn’t mean you have to carry it down again when you want to get rid of it. Junk King is going to send over a dedicated moving crew who is going to do all the work for you. That includes climbing stairs to get at those items you want gone. All you need to do is sort through the boxes to determine what goes and what stays. Then just point it out to the Junk King crew and you’ll be okay.

Before the crew starts loading, they’ll have to lock down the fee. That can only happen after they’ve had a chance to look over everything. They’ll be basing that fee on how much room all that stuff will take up on the truck. You won’t ever be charged by the pound with Junk King. Once you agree to the price, they’ll start bringing down the stuff. While they’re at it, they can also clear out the rubbish from your closets and garage. Think of what a difference this is going to make around your house.

Remember that everything you give to Junk King might be repurposed. Junk King prides itself on avoiding making trips to landfills. They would much rather drop off stuff at a charity thrift store or recycling center. It’s all part of the service.

Don’t let your attic or home be overcrowded by rubbish. Give it all to Junk King Miami today.