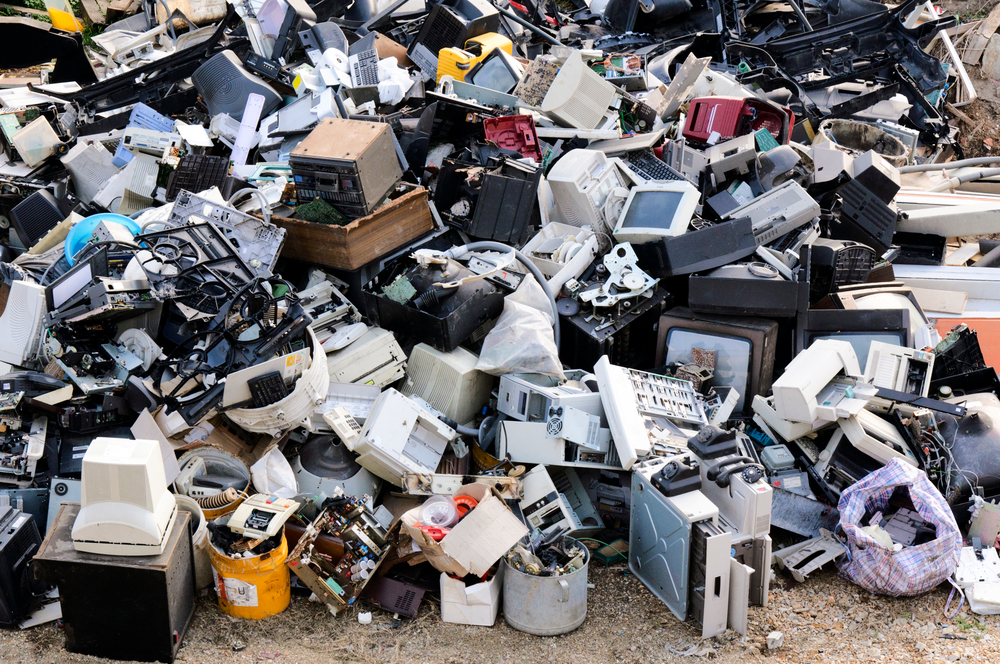 So, did you get yourself a big, beautiful, new, large screen TV for Christmas? You weren’t alone. For thousands of people, Black Friday shopping might as well be known as “Big TV” shopping since so many of these units are sold then.

Nonetheless, if you managed to get a nice model and a great deal on it, then congratulations on your purchase! But what about your old TV?

It’s not like you can just put it into the trash.

For one thing, it probably wouldn’t fit. And, if your old unit is one of those ancient sets, you’ve got a bigger problem on your hands. In fact, you can’t even legally toss one of those old cathode ray tube (CRT) sets into a dumpster. And that includes those awkwardly large computer monitors that seemed to all come in some shade of beige!

So, what do you do with them?

A Sea of Televisions and Monitors – Television Disposal Considered

The truth is, if you have that old television tucked in a back bedroom or out in the garage, you’re not alone. In fact, it’s been estimated by the EPA that there were almost 705 million cathode ray tube (CRT) televisions sold in the United States since 1980.

This is why there are an estimated 20 million or more of these old TV sets being disposed of every year – and that number gets larger each year, as well.

If your old television happens to be in working condition, then it might be far better to simply donate it than going through the process of disposing of it. Especially those old TV sets with the CRT inside. These venerable old machines are, unfortunately, something akin to toxic time bombs since they contain a variety of hazardous materials.

Those massive, old cathode ray tubes are made of primarily toxic materials. According to an article at Wikipedia,

“Older color and monochrome CRTs may have been manufactured with toxic substances, such as cadmium, in the phosphors. The rear glass tube of modern CRTs may be made from leaded glass, which represent an environmental hazard if disposed of improperly.”

A typical CRT can contain up to eight pounds of lead, along with a layer of cadmium-based phosphorus and other toxic heavy metals. In most circumstances a CRT is not a threat to human health. However, if the glass tube breaks, the lead and other materials can be released into the air or ground.

Consequently, many states have established varying types of laws that impose restrictions and regulations on how these devices are disposed of, including California.

According to the National Conference of State Legislatures (NCSL) website:

This means that at least half the states only allow for legally sanctioned disposal methods for old TVs and other electronic waste items, known as e-waste.

In fact, if you’ve ever tried to drop off an old television at a recycling center you already know about the paperwork and fees, etc. required just to get rid of it.

So, what’s the better option?

At Junk King Peninsula, we provide an efficient, safe and eco-friendly television disposal service to make the whole process easy for you. And, because it’s a regular part of our junk removal business, we’re good at it!

Those huge, flat-screen televisions present a disposal hazard, too.

While they’re not as hazardous as those lead-filled glass CRTs, the newer large, flat-screen TVs still contain some toxins and hazardous materials, along with plastics, copper wiring, and circuit boards.

Part of the problem with getting rid of these used “new” televisions, is the sheer bulk and size of the units. And, because old flat-screen television disposal can be a problem, it causes many owners to wonder what they should do with an old TV that still works?

Sometimes these can be given back to the manufacturer or retailer. In fact, many major brands and retailers have programs for taking back old products, sometimes even if they no longer work. In addition, some retailers offer collection programs for recycling flat-screen televisions.

Of course, recycling is always the best option for old televisions that do not work.

“Being green” is something you hear often, especially from businesses here in the greater Bay Area. But at Junk King Peninsula, being green is a fundamental part of our business model and our mission, not just a calculated marketing slogan.

That’s because we’re deeply committed to keeping as many of your items as possible out of landfills – including old televisions. In fact, we’re the only national junk removal company with the goal of recycling 60 percent or more of every junk removal job we carry out by using local sorting facilities.

Junk King is proud to be the greenest junk removal service in North America.

We pioneered recycling-based junk removal back in 2005 when the company was started, and we’ve been going green ever since. For example, when it comes to television disposal, we’ll make sure that your TV is disposed of at a proper recycling facility so that it cannot harm our ecosystem.

The Best Pricing in the Peninsula Area for Television Disposal

Junk King is proud of being recognized as the Number One junk removal service in the industry.

And at Junk King Peninsula we make television disposal easy, too. And we do so much more!

We are always working to ensure that our pricing is the lowest in our service area. In fact, one of the hallmarks of our company is our fair and transparent pricing. In addition to offering the best prices, we give you four different ways to get an estimate:

In fact, we guarantee to beat any written estimate from a junk removal company that is licensed, insured, and is fully committed to running a recycling-based operation to keep unnecessary waste materials out of our landfills, just like Junk King!

Whatever the reason for television disposal, it’s important that it’s done properly, especially in California.

It could be a recent purchase of a new television that has left you with an old television (or two or three!) that you no longer have room for. Or maybe your old television has broadcast its last and has been shut off for the last time. Perhaps it’s not just a TV, but a few old computer monitors or a gaming console complete with a screen or monitor that is obsolete or burned out.

There can be many reasons you find yourself with a few old TVs or monitors that need to be disposed of, so, when you call Junk King Peninsula, you can be sure that we’ll provide you with efficient and environmentally friendly service and you can avoid having to do your own television disposal.

And our experienced junk removal team will carefully remove and haul off any other types of junk you have, as well. (except hazardous waste!)

Our professional and insured television disposal team will show up at your home or office and we’ll call 15 to 30 minutes before we get there. Once we arrive, we’ll give you a free estimate based on how much room your junk takes up in our truck. You simply point, and we’ll load your old junk items into our big, red, clean television disposal trucks and haul them away with no hidden fees!