There is certainly not a shortage of environmental problems that our world faces today. From global climate change, to acidification of the oceans, to biodiversity loss, the problems we face only seem to increase on a yearly basis. Despite the abundance of bad news, there are also several hopeful and uplifting examples of people, communities, and regions coming together to fight against the environmental problems we face. Zero waste cities, an effort that was originally born in the European Union, has spread around the world. This program is a continuous effort to phase out waste – not by burning or landfilling it – but instead by creating and implementing systems that do not generate waste in the first place. The challenge is for cities, its businesses, and its residents to implement policies and protocols that reduce waste streams, increase recycling and upcycling efforts, and put into action programs to reuse items that would have formerly ended up in landfills. The pioneering efforts of the city of San Francisco have had ripple effects across the state. Just south of San Francisco, the city of San Carlos has also been implementing a number of programs and aimed at potentially reaching Zero Waste in the near future. For example, the San Carlos Recycling Ordinance is designed to assist the City in diverting the equivalent of “50 percent of waste from landfill garbage disposal on a per capita basis.”

To help reduce waste streams ending up in local landfills, local governments certainly should play an important role. The city of San Carlos has a well-functioning commercial and residential recycling program, and the San Mateo County´s Office of Sustainability also is coordinating efforts to reduce waste, encourage recycling and composting, and increasing the amount of hazardous and e-waste recycling initiatives.

Despite all these impressive and inspiring efforts in our community, many local businesses and residents might feel like they simply do not have an efficient and affordable way to get rid of their bulky junk items. Foreclosure cleanouts, massive home renovation projects, and deep de-cluttering initiatives will certainly leave homeowners with an enormous amount of junk sitting around their home. How exactly can people in this situation get rid of their excess waste while still honoring our city´s commitment towards radically reducing waste streams?

Enter Junk King of San Carlos. We understand that getting rid of large, bulky junk items can pose a headache for homeowners. The difficulty of getting rid of old furniture and energy inefficient appliances often means that many resident of San Mateo County end up storing excess “stuff” in their basements, garages, or other odd areas of their home.

We also know that freeing up space in our homes can not only make our homes more comfortable and “livable,” but can also allow homeowners to even reduce their carbon footprint by upgrading to more energy efficient appliance options. For example, that 20-year old refrigerator that you still have in your kitchen is probably using 4-5 times more electricity than the more energy efficient models on the market today.

We provide professional junk removal services to the Peninsula area of San Mateo County, including to residents and business owners of:

The Importance of Transitioning to a Circular Economy

Approaching the Zero Waste ideal requires serious efforts by all parties involved. It doesn’t mean, however, that consumption needs to stop all together. For example, take the case of food waste. We all have to eat, and even if we make a serious effort to not waste our meals, some food waste is inevitable. Instead of sending that food waste to the landfill where it will decompose together with inorganic waste and lead to an enormous amount of greenhouse gas emissions, composting programs allow our food waste to be turned into fertile soil for the cultivation of more crops.

This is a perfect example of a circular economy, defined as “a model of production and consumption, which involves sharing, leasing, reusing, repairing, refurbishing and recycling existing materials and products as long as possible. When a product reaches the end of its life, its materials are kept within the economy wherever possible.”

So how exactly can individual residents participate in circular economy model when doing a major renovation or massive de-cluttering of their home? One simple way is to take the time to post some of your unwanted items on websites or listservs such as Craigslist, NextDoor, FreeCycle, or PennySaver. These websites allow you to connect with some of your neighbors who might be needing an extra couch or lamp for an accessory dwelling unit (ADU) they are building in their backyard. You can choose to either donate your old junk items, or even sell them to make some extra income. As the saying goes: “One person´s trash is another person´s treasure.”

Of course, not every used couch is going to find a new home via a listing on Craigslist. Junk King of San Carlos is the top-rated residential junk removal company in the region, and makes every effort to ensure that the items we pick up can be beneficially reused by others. We believe whole-heartedly in the circular economy´s goal of designing waste out of the system, and have developed several partnerships and relationships with donation centers across the Peninsula. If your old furniture is past the point of reuse, we also have longstanding relationships with recycling centers across the Bay Area. We are proud to say that 60 percent of all the junk items we pick up either get recycled or reused. 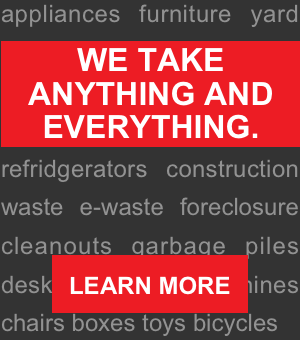 Our owner, Michael Andreacchi, started Junk King as part of a wider effort to help people reduce their environmental footprint and help local communities minimize the waste that goes into their landfills. Today, homeowners of residents of San Carlos and the surrounding communities can rest assured that the junk we pick up will most likely stay out of our area landfills.

We also believe in providing top-notch customer service so that getting rid of your junk in an eco-friendly way is as efficient and effortless as possible. Simply call us at 1-888-5865(JUNK) or consider booking us online here.  Our Junk King team will call you 15-30 minutes before your scheduled pick up, offer up-front pricing and leave you feeling like the weight of your clutter has been lifted off your shoulders. Call us today to help free up space in your home while simultaneously lowering your environmental footprint!