Before the Internet, customers could voice their opinions about a company by making a phone call directly to them for sending a letter. That meant that any reviews were private. Today, everyone can share their opinion in a variety of ways. Companies are well served to provide outlets for their customers to post comments. Not only does that help them improve their business but it also lets potential customers know what’s going on. When it comes to junk hauling, one look at the reviews left by Junk King Birmingham customers will make it clear this is the company to call on for all kinds of junk hauling chores. 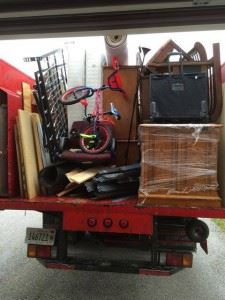 “Awesome customer service, great price! The guys were done in 30 minutes and there was no trace of the former junk pile. That job would have taken us hours and a trip to the dump! I was very pleased! I will definitely be using them again.” – Paul C., Moody

Junk King Birmingham knows how valuable your time is and they don’t want to waste it. The effort that you would put into hauling your own junk could take up most of your day off. Instead, junk King gets in and out with very little fuss. You’ll wonder why you waited so long to make the appointment!

“The Junk King crew showed up on-time, actually early! They called before coming out to be sure it was ok to come early. They had all of our stuff loaded in no time. What more could you ask for?” – Brenda F., Helena

As with most service companies, Junk King is at the mercy of traffic. That’s why they build in a kind of buffer between appointments. They want to make sure they have plenty of time to get from one location to the next. The crews will always let you know what their status is throughout the day until your job is complete. It’s part of their approach to junk removal.

“You did what you said you would do; you did it promptly and on time; and the price was reasonable. We are appreciative of this service being available in our area.” – Hylott A., Birmingham

Junk King’s pricing policies are always based on volume and not weight. You never be charge by the pound with Junk King. And that can make a huge difference with what you want to get rid of. In other words, anything goes regardless of weight.

“Everything is handled with the customer in mind!” – Debbie O., Birmingham

What more could you want from a professional junk hauling company? Do you have things you want to get rid of around the house or yard? Then Junk King Birmingham is the only call to make.

Providing junk removal services to the Birmingham area, including: