It’s not uncommon to keep a hold of cardboard boxes. The thought is that you’ll eventually find something to put into that box later on. Unfortunately, once those boxes are broken up to be stored they rarely get put back together again. They are just put into a corner and collect dust. The same can be said for a lot of rubbish in your house. You might think you’re going to fix an old computer or pair of shoes but in reality those things are better off replaced. Why are you holding onto those cardboard boxes that clutter? It’s time to let go of that stuff and that means making a call to Junk King Chicago West. 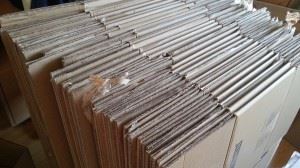 The goal for Junk King Chicago West is to help you get rid of all your clutter without you lifting a finger. They mean that quite literally. Even if you have something upstairs that would be easy to bring downstairs, they would prefer if you let them do all the work. When you hire movers, you expect them to be able to lift any heavy object and maneuver it safely out of your home. That is exactly what you’ll be getting when you hire Junk King Chicago: a pair of very capable movers. You’ll be in charge of this team while they are at your house. Your job is to just point to the things you want taken away.

As you go through all the items you want to get rid of, you may discover that some of it still has a little life left in it. Just because you’re done using it doesn’t mean it has to be tossed out into the trash. At least it doesn’t mean that when you hire Junk King Chicago West. This is a company that is dedicated to repurpose in the bulk of what they collect. Junk King has a very respectable 60% diversion rate. That refers to the amount of stuff that’s kept out of landfills. The Junk King Chicago West crews have all been trained to spot those items that can be donated to charities or dropped off at recycling centers. They’ll make that happen at no extra cost. If you want to clear out cardboard boxes and rubbish quick, then the only call to make is to Junk King Chicago West.