Four days after hurricane Harvey made landfall on the Texas coast, Dallas shelters were hosting around 1000 hurricane Harvey evacuees. The four shelters around the city were prepared to take in up to 6000 people. But in the coming days, when more flooding is expected, those numbers will certainly grow. Already people are being bused in from Galveston and Beaumont. 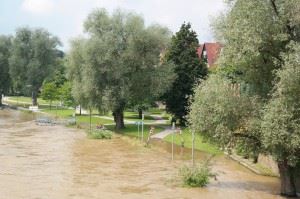 The biggest shelter in Dallas is the Kay Bailey Hutchinson convention center. There are enough cots to sleep up the 5,000. City officials are prepared to take in as many people from Southeast Texas and for however long as they need to be there.

“We may have hundreds more. We may have thousands more,” said Dallas Mayor Mike Rawlings told a local newspaper.

Mayor Rawlings has been in constant communication with Houston Mayor Turner letting him know that Dallas is standing by to help with the overflow. Down in Houston, the George R Brown convention Center was filled with 10,000 people, which is twice the capacity. It may come down to a matter of means and transportation to get those evacuees out of Houston. With that many people crammed into one space it’s understandable that tensions may run high and supplies run out.

According to city officials, it cost about $100,000 a day to operate the toilets, showers and hand washing stations at the convention center in Dallas. So far, the city Council has already approved spending $8 million on relief efforts. No one expects that number to stay that low. Once buses can safely get out of Houston, there could be an influx of between 20 to 30,000 evacuees.

By comparison, 26,000 refugees came to North Texas after Hurricane Katrina over 12 years ago. Many of those folks stated shelters for months and others simply moved to Dallas altogether. It could be when all is settled that the damage and displacement from hurricane Harvey will exceed that of Katrina.

Thankfully, the lessons learned from that storm has Dallas prepared to take on the refugees. There’s also no timeline for closing the shelters. They’re going to stay open as long as they have to.

Many businesses are already pitching in to do what they can. Junk King Dallas crews are working diligently to clear storm debris from around the area and are ready to go down to Houston once the floodwaters receded. If you have storm debris in your yard, then don’t wait for the city to clean it up. You can always count on Junk King Dallas for fast storm debris removal.

Providing junk removal services to the Dallas area, including: