The day after Halloween is a “day of remembrance” in many cultures. This is when they honor their dearly departed. A lot of that honoring happens at the gravesites but instead of being somber, it is a kind of celebration of life. This isn’t to be confused with what happens on Halloween when cemeteries are just meant to outright scare folks. Yes, you might never want to step foot in a graveyard on October 31st, but on November 1st, it’s a nice trip to make. 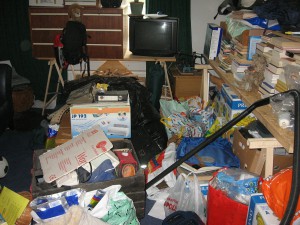 Around the house, you could be living with those two kinds of distinctions when it comes to rubbish. Some of the rubbish you can throw out and not give another thought to but other items are hanging around with no sign of ever leaving. You could say the rubbish is “haunting you.” When you feel like the rubbish is closing in, then it is time to bring in Junk King Chico. These are the junk hauling pros who never met a pile of rubbish they could make vanish.

Only you get to decide what is rubbish and what is worth keeping around your home. A good rule to follow is the “usage” rule. If you haven’t used something in a year, then it is probably something you might neve use. Do you need to hang onto it? That rule can certainly apply to a lot of items in your closet. Spending some time in your closet might reveal some long forgotten items that you would wear again but there could be just as many that you would never consider putting on. The minute you decide something is useless, it becomes rubbish to you. And all of that rubbish can be turned over to  Junk King today for fast removal.

Just remember, then when you give something to Junk King for disposal, it won’t actually be disposed of in the traditional sense. Instead of being dumped in a landfill, that stuff could end up in at a charity helping out those in need. It is the perfect way to get rid of things especially at this time of year. Don’t be haunted by rubbish in your home one more day. Give it all to Junk King Chico.

You won’t find a lot of finished or unfinished basements in Southern California. This really isn’t “basement country.” That means for extra storage or room, developers go up as in the attic. The best attics are the ones that you can get to by climbing a flight of stairs and you can actually stand up without hitting your head on a cross beam. There are other attics that have a pulldown ladder. Those are often used primarily for storage. With either type of attic, you want to make sure that what you’re keeping up there has some value otherwise it is just taking up space. This is where Junk King Chico can be of service. They’ll be able to provide fast attic clearing of all kinds of unwanted rubbish. To get the most out of your junk removal session with Junk King, you’re going to need to devote some time to sorting through all the stuff you have up in the attic. Most organizing experts suggest that you create three piles: Keep, trash or donate. When you hire Junk King, you only need two piles: Keep or Junk King.

The crews who will be doing the loading of your stuff have all been trained to spot the difference between something that is beyond repair or use and something that can be donated. Part of Junk King’s junk removal services is the responsible disposal of everything they collect. That includes making drop offs to charities. They’ll be able to put a lot of what you’re giving away back into circulation. That will make a big difference for your desire to recycled as much as possible.

After you do your sorting and know what you want to get rid of, you can set up your appointment with Junk King either online or over the phone. When the crew arrives, you show them what you want gone and they’ll get it out of the attic whether that takes one trip or a dozen. You might prefer your attic to stay empty after your junk removal or put it to more practical use. Either way, Junk King Chico is going to be a big help.