How fast do you want to get rid of your junk? You might have been “collecting” this stuff for several years but when you reach the breaking point in terms of storage, then it’s time to let go of your junk. One call the Junk King Phoenix can make that happen in a very timely fashion. It could also happen the same day you reach out to Junk King Phoenix. By the time you finish reading this post, you could set up an appointment and have your junk cleared in a matter of minutes. 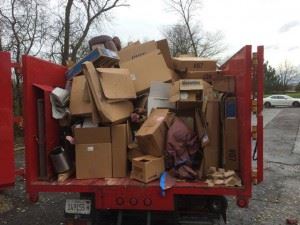 How long the Junk King Phoenix crew is going to stay at your home depends on what you’re getting rid of. If it’s a few items, then it won’t take them but a couple of minutes to load it all up onto their truck. If they have to take something apart before can be loaded, then obviously, they’ll need more time. The same can be said if they are dealing with an “extreme” type of clean up like at a hoarder’s home. If the Junk King Phoenix team does stick around a bit longer, then you won’t be paying any additional charges. Junk King Phoenix never charges by the hour or by the pound.

The price for Junk King Phoenix is determined once the crew is at a chance to look over all the things you want to get rid of. They will estimate how much room all that stuff will take up on the back of the truck. These crews are really great when it comes to packing up that truck. They know how any combination of junk will fit. They want to get as much into as little space as possible. When that happens you’ll benefit by paying the low end of the price scale. That’s a win-win for everybody.

Also included in that flat fee will be how junk King disposes of all the stuff they collect. Instead of rushing to the landfill like most junk haulers, Junk King Phoenix would much rather go the extra mile to drop your stuff off at a recycling facility or charity. This way they know they’re doing their best to keep the environment around Phoenix as green as possible. You don’t have to live with your junk one day longer as long as Junk King Phoenix is just a phone call away.

Providing junk removal services to the Phoenix area, including: