A backyard deck is ideal at the beginning of the day and the end of the day. In the morning, it’s an nice place to have that first cup of coffee while reading a newspaper or catching up on Facebook posts. At the end of the day, that deck is perfect for unwinding with a cool drink while dinner cooks on the grill. The only thing that would hamper those two times would be if you had to stare at rubbish on your deck. 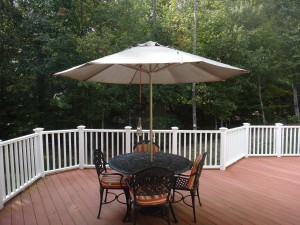 Backyard decks are a lot like an extra room on a house. They also become an open space where you put all those heavy objects you can throw out in the trash. Many decks have an old AC unit tucked in the corner or some patio furniture that has seen better days. In extreme cases, you might put an old washer on the deck. The chances for using a deck as storage increase if that deck is covered. But an awning isn’t going to offer total protection. If something is on the deck because you’ve run out of room in your home, then it is time to bring in Junk King Seattle.

Clearing a backyard deck is what Junk King would classify as an “easy” task. There might be a couple of steps to navigate but everything is out in the open. It won’t be challenge to carry those items off the deck, along the side of the house and down the driveway for loading into the Junk King truck. This entire operation could take less time than it takes to enjoy that first cup of coffee.

As long as you’re bringing Junk King out to clear off your backyard deck, you could also put them to work clearing out a lot of other spaces around your home. Maybe you’ve stashed some lumber or pipes under the deck. That can be pulled out and loaded up. The same can be said for any bulk items from your garage or basement. Junk King isn’t going to be challenged by climbing stairs or working outside. You’re going to enjoy your summer a lot more after Junk King Seattle has cleared your backyard deck from all that rubbish.