February was a record-setting month for rainfall in Pennsylvania. The result of all that rain has been a series of landslides scattered throughout much of the state. The most recent occurred here in Penn Hills along parts of Hulton and Old Hulton Roads. All together there have been 60 reported landslides in the past month. Some of these have required the evacuation of homes but they all involve a messing cleanup. PennDOT crews have been working around the clock to get the roads open as quickly as possible. What is the worst after storm cleanup you’ve ever had to deal with? Flooding in the basement is never fun. The same can be said for trees that get toppled over. With those big messes, the city can only do so much. It falls to the individual homeowner to take care of the cleanup. Thankfully, a company like Junk King Pittsburgh is standing by to pitch in.

Junk King Pittsburgh is a professional junk hauling service. What makes them professional? They are part of a national chain of junk haulers who all follow the same high standards for customer service. Junk King understands how valuable your time is. They know if you’re in need to junk or yard waste removal that you don’t want to wait to get it done. If you call Junk King today, there is a good chance all your unwanted rubbish could be picked up by tomorrow. It might also be picked up within a few hours depending on the location and availability of the crew.

The crews working for Junk King have all gone through proper training. That allows them to be licensed and insured. You want that kind of professional working in your home especially when it involves hauling out heavy pieces. If the Junk King crew thinks your floors might be at risk, then they might take apart the item before carting it out. That’s just how they operate.

Your junk removal session can finally help you clear out all the things you’ve been holding onto that you know you don’t need. That is going to make a big difference in your home. For any type of professional junk hauling in Penn Hills, you can always count on Junk King Pittsburgh.

If you want to drop off some cookies for the Franklin Park firefighters, don’t go to the old firehouse. They’ve moved out. Over the last couple of weeks, the firefighters have been putting the finishing touches on the 1 1/2-story, 24,000-square-foot building. This is facility which is 9,000-square-feet larger than the old station. 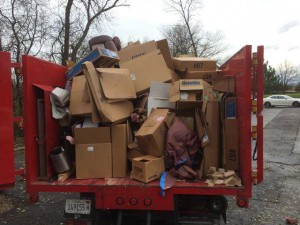 “This building is a vast improvement over the old station, which was not worth repairing,” said Bob Jarvis, president of the Franklin Park Volunteer Fire Co. to a local news outlet. The fire company began operating out of the new building Feb. 19.

Originally, there was talk about refurbishing the old station, which was built in 1949. However, when planners got into the details, it was found to be too costly to replace a roof and bring that building up to current safety codes. After all, firefighters need to be up to code. In this case, it was actually cheaper to build a new building than fix the old one. You won’t hear many complaints from the crews.

That idea of getting something new to replace something old is probably something you contend with around the house every day. It can apply to everything from shoes to a computer. The challenge becomes what do to with the old stuff. If it can be tossed out, then the choice is clear. However, if you don’t want something to go to waste, or it is too big to put in the trash, then it’s time to bring in Junk King Pittsburgh.

Junk King is a professional junk hauling service. It’s not just the branded truck and red uniforms that the crews wear that makes them professional. It is their attitude and problem solving abilities. The Junk King squad wants to make sure you don’t lift a thing from your home. They’re going to carry everything right from the spot. Don’t worry about making things easy for them. They don’t mind climbing stairs!

As for waste, Junk King would much rather drop off your collected items to a charity or recycling center than a landfill. It’s much better all around. When you need quality junk hauling in Franklin Park, then you need to call Junk King Pittsburgh.